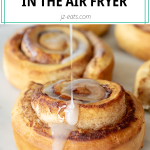 Warm and fluffy cinnamon rolls, made right at home. Enjoy a sweet treat with these frosted Air Fryer Cinnamon Rolls. You’ll be amazed at how delicious cinnamon rolls in the air fryer are!

The best breakfast can now be made at home in your air fryer! This one ingredient recipe calls for Pillsbury cinnamon rolls topped with ooey-gooey cream cheese frosting.

Forget all the work of making homemade cinnamon rolls from scratch, grab a can of Pillsbury Cinnamon Rolls and make the best air fryer cinnamon rolls at home.

If you follow me on Instagram, you know I love using my Ninja Foodi air fryer to prepare just about everything! It’s my favorite way to make a breakfasts, simple lunches, and easy gourmet dinners (hello air fryer filet mignon).

Today, we are pulling out the air fryer to make a childhood favorite – cinnamon buns!

Whether you add them to your weekly meal rotation or prepare them for a special occasion, there is no reason to heat up your oven to make these delicious rolls.

If you haven’t tried this easy recipe yet, don’t wait! The best part, in less than 10 minutes, you are going to be in cinnamon roll heaven.

Ingredients for Cinnamon Rolls in the Air Fryer

Depending on the size can you buy, you will get 5-8 cinnamon rolls per can.

If you don’t like icing, you can sprinkle the cinnamon rolls with powdered sugar instead.

Make Cinnamon Roll Air Fryer bites by cutting the roll into 4 pieces before cooking them!

How long do you cook Pillsbury Cinnamon Rolls in the Air Fryer?

I find that 6-8 minutes is the sweet spot. The 7-minute mark is my personal preference when it comes to doneness; It leaves them soft, but cooked!

Can you use Aluminum Foil or Parchment Paper in the Air Fryer?

Yes! You can use aluminum foil or a piece of parchment paper when cooking with your air fryer.

Although aluminum foil can be used, it should only go in the basket, not the bottom, and not block the flow of air.

It’s important to note that aluminum foil reacts with acidic foods like tomatoes, citrus fruits, and peppers. So, if you are cooking with those, I’d recommend using parchment paper.

I like using air fryer parchment paper sheets when cooking. It’s perforated so it doesn’t block the air flow, and it fits perfectly in the basket.

Can you cook frozen rolls in the air fryer?

If you store your canned cinnamon rolls in the freezer, don’t fret, you don’t have to defrost them in order to pop them in the air fryer.

After 5 minutes, I like to brush the top of the rolls with a touch of melted butter or spritz them with nonstick spray or cooking spray and return them to the air fryer for another minute or 2 or until golden brown. Once they come out, frost them and serve immediately.

How do you make cinnamon rolls soft again?

Made cinnamon rolls, but didn’t finish them all? Bring your slightly stale leftover cinnamon rolls back to life by putting them in the microwave with a small bowl or cup of hot water for 30 seconds.

To heat them after softening them, wrap the cinnamon rolls in a damp paper towel, place them on a baking sheet, and heat them in the oven for 4-5 minutes at 350⁰ F.

How do you store leftover cinnamon rolls?

Wait for the cinnamon rolls to reach room temperature and then store them in an airtight container.

PIN IT to your air fryer recipes or dessert recipes board to save it for later!
Find me on Pinterest for more great recipes. I’m always pinning! 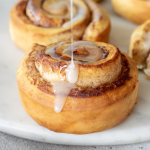 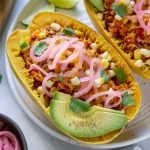 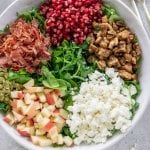 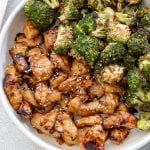 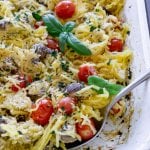