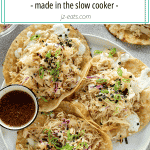 Trader Joe’s Soyaki Tacos fuses a Mexican delicacy we all know and love with Asian flavors for a tasty combination. Topped with cole slaw, furikake seasoning, and green onions, these chicken tacos will become a staple in your weekly dinner rotation!

I love Trader Joe’s for my weekly grocery runs. They are constantly rotating seasonal products, so I find something new every time I shop and I make so many new recipes using only Trader Joe’s ingredients. I showcase all of my Trader Joe’s recipes on Instagram, so I’m excited to finally share one of my favorites here on the blog!

Looking for more taco recipes? Give these Blackened Salmon Tacos a try next.

What is Trader Joe’s soyaki?

Trader Joe’s soyaki sauce is a teriyaki sauce that is unique to Trader Joe’s and can’t be found elsewhere. This sauce can be used as a marinade or glaze for any meats and vegetables, or even a dipping sauce. It’s great in stir fry recipes and one of my favorite sauces from Trader Joe’s.

Is soyaki the same as soy sauce?

No. Soyaki not fermented like soy sauce is, though soyaki does contain soy sauce. Trader Joe’s Soyaki is their version of a teriyaki sauce, but it does not contain sake or mirin, which are two key ingredients in most traditional teriyaki sauces.

This recipe is broken down into three sections: the filling, the cole slaw, and the toppings. This may seem like a lot of ingredients, but it’s so easy to find all of them at your local Trader Joe’s. Trust me, the final product will be worth it!

Trader Joe’s soyaki: this unique teriyaki sauce really brings so much flavor to the chicken we will be adding to the tacos.

Toppings: you will need mozzarella cheese and will be grating it with a cheese grater it rather than buying it pre-shredded. Cheese that is pre-shredded doesn’t melt as quickly. If the tortillas stay in the pan for too long they will burn, so we need cheese that is going to melt quick.

Furikake is a staple in Asian food, giving it a slight nutty flavor from the sesame seeds mixed in. Green onions just add a nice, final touch. You can also garnish with hot sauce or sriracha and any other fresh herbs you desire.

How to make soyaki chicken tacos

3. Shred the chicken. When the chicken is finished cooking, transfer from the slow cooker to a plate and shred with two forks. You can also shred the chicken using a stand mixer with the paddle attachment.

4. Assemble the tacos. Heat a cast iron pan on medium heat for 3-4 minutes. Working in batches, dip the tortillas in the leftover soyaki sauce in the slow cooker to coat both sides. Then place them in the hot pan and top with shredded mozzarella and chicken. Cook for 2-3 minutes, until the cheese has melted and the bottom of the tacos begin to char.

5. Garnish and serve. Transfer the tacos to a serving plate and top with the cole slaw mixture, furikake seasoning, and sliced green onion. Serve with a small bowl of soyaki sauce from the slow cooker for dipping.

Can you leave chicken in the slow cooker too long?

Overcooking chicken in the slow cooker is definitely possible. Cooking the chicken for four hours on low is just enough to give you tender chicken that will shred easily. You can turn the slow cooker on warm if you aren’t ready to eat when it’s finished, but I don’t recommend leaving it in there for more than an hour.

Alternatively, you can make this recipe ahead of time if needed. Place the chicken in a glass storage container when it’s done cooking and store it in the refrigerator. When you are ready to eat, simply microwave the chicken for 1-2 minutes to warm it up a bit and continue heating it in the pan when assembling the tacos.

How to make this recipe ahead of time

When you are ready to eat, hydrate the chicken before microwaving by adding some of the premade sauce to it. The cole slaw may be best when fresh, but you can make it ahead and store it in the fridge if necessary. Once the chicken is warmed up, you can continue assembling the tacos as per the instructions below and finish by adding cole slaw and toppings.

PIN IT to your Trader Joe’s recipes, dinner recipes, or taco recipes board to save it for later!
Find me on Pinterest for more great recipes. I’m always pinning! 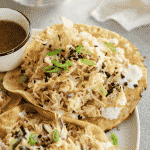 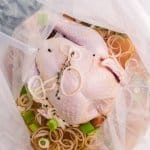 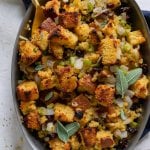 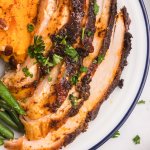 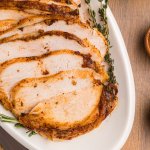